A quiz will be held on Thursday November 21st at The Wrotham Arms, Ramsgate Road, Broadstairs, to raise funds for MNDA East Kent. The Quiz will start at 7.30 prompt

MNDA East Kent is looking to enter 2 tables of 6 for the quiz, please email chair@mnda-eastkent.org.uk to book a place.

Entry is £5 per head, nibbles will be provided and teams may bring any extra food they wish.

There will be two games, winners of which will receive a prize. There will also be a raffle.

We look forward to seeing as many supporters turning out to support the Wrotham Arms who have been a fantastic supporter of MNDA East Kent for many years.

Can you WALK for 40 minutes and can you raise £40 sponsorship?

If the answer is yes to both please join us in Canterbury on Sunday 6th October. The venue is Lifestyle Fitness, Canterbury Campus, Knight Avenue, Canterbury, CT2 QA and the time is 2pm.

This year is the 40th anniversary of the Motor Neurone Disease Association. To mark this event Brian Sackett and his sister Hilary Smith are organising a Ruby Walk to D’Feet. Both Brian and Hilary lost partners to MND, so it is a subject very close to their hearts.

Registration details are shown below, if you register on the web site, you will be sent an electronic sponsorship form which you can print, if you chose to register with Brian Sackett he will send you a sponsorship form.

Every sponsored walker will receive an MNDA tee shirt and upon completing the 40 minutes, you will receive a souvenir medallion of the day.

You can register for our walk at http://mnda-eastkent.org.uk/rubywalk

You may donate to the Ruby Walk to D’Feet MND at https://www.justgiving.com/fundraising/rubywalk2019 all monies donated will be used to support people living with MND in East Kent or to contribute towards research for a cure.

Brian and Hilary gave an interview to Kent On Line. It is very moving and worth a read. https://www.kentonline.co.uk/canterbury/news/i-thought-it-can-t-strike-our-family-again-how-wrong-was-i-210322/ this link also takes you to the KMTV interview.

A report of the match together with photographs will be added here following the game.

This month he has been raising awareness of MND and Kennedy’s Disease as he is a finalist in the National Cat of the Year. He is in the Better Together category where it is all about how he and his owner, Mark Styles look out for each other.

Spike, a 17 year old ginger and white moggy has been in the local paper -the Kentish Gazette, videoed and photographed by Cats Protection and on the local news programme – Meridian.

Spike’s category is one which is decided by a public vote, so if you would like to vote for him after 30th June go to the www.facebook.com/catsprotection

Winners will be announced on 3rd August at the Savoy, London. 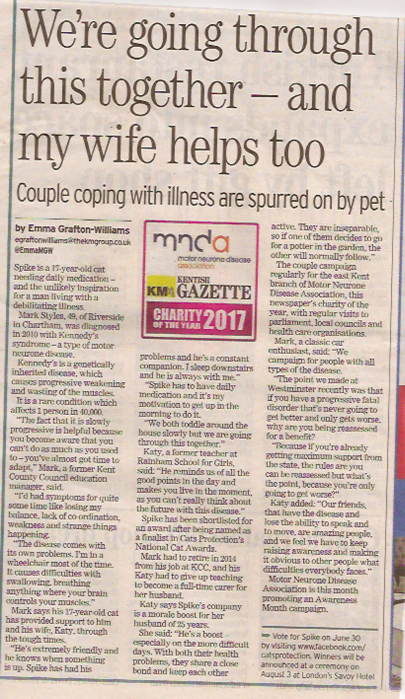 The Association has been working on the Government?s major discussion paper?outlining their ideas for getting disabled and people with long-term conditions into work. People living with MND and those affected by it have been surveyed for their views on the proposals. 144 people responded to the MND Association?s survey.

Alongside this there have been two engagement events organised by the Department for Work and Pensions (DWP) and the Disability Benefits Consortium (DBC) of which the Association is a member. One was for the policy staff at the Association and Mark and I attended on behalf of people with lived experience. We were able to discuss with civil servants directly and discuss and challenge their thinking.

The Association will be submitting a response by 17th February. This will be on the main Association?s website.

2016 has been an interesting and successful year for MND Association East Kent Group.

The year started with a party at the Wrotham Arms in Broadstairs, followed in very short order by a Support meeting in Folkestone and a visit to Westminster where 6 people affected by MND addressed some 42 Parliamentarians.

Young Carers Awareness Day was also in January, which was followed by the Burns Night Supper at BinElla in Faversham.

Mark and Katy Styles spoke to the Psychology Society at the University of Kent on Tuesday 23rd February. 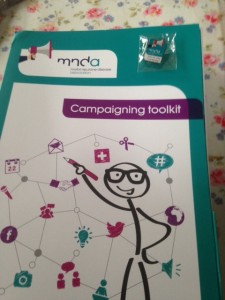 During April The Campaigning Toolkit, the brainchild of East Kent’s?Katy Styles was launched, A Masquerade Dinner in Tenterden raised almost ?10,000 and the?South Coast Road?Trip tee shirts went on sale, together with announcements of the events in East Kent.

A brilliant Spring Lunch was held in May and the press release for the South Coast Road Trip was sent to all media outlets.

June was the month of the South Coast Road Trip with 19 events in 17 days as Clive and Lynn Hudson travelled by public buses from Broadstairs to Land’s End, raising over ?10,000 and also creating great awareness of MND in the process.

The Clock Tower in Herne Bay was lit up with MND colours and MND awareness day and The Podplus 5K run was yet again a success was a successful run raising funds for MND in East Kent.

Campaigning were busy at Parliament for a Carer’s Week Reception representing pwMND and their carers.

In August Summer was in the air with great music at the Broadstairs Summer Hop at The Pavilion, which followed on into the evening at the Wrotham Arms.? Daren Edwards was catching enormous fish in France and the signed road trip shirt went on display at David Niven House.

Katy Styles addressed The National Council for Voluntary Organisations (NCVO)? Campaigning Conference on September 3rd, being the only volunteer to address the meeting.? On the same day Judy Keay attended Project Respect, which?is the MND Association?s Equality, Diversity and Inclusion Strategy ? and?all members are encouraged to help shape it.

The Co-op run from River to Mill Hill was on 30th September.? The run followed the diagnosis of MND given to local lady Linda Clarke.? The run raised over ?1000 for MND. See https://mnda-eastkent.org.uk/wordpress/?p=1876 for more information.

We held a volunteer recruitment day in Canterbury in early October, the event was an interesting experience and we learned much about how to present any future recruitment day. Unfortunately it was a foul day and we were not successful in gaining any new volunteers.

They all spoke with?Julian Brazier, MP for Canterbury and Whitstable who attended and promised to follow up the points made at the reception, and other MP’s at the reception. ?Mark and Katy also spoke to the Minister, Penny Mordaunt about their concerns .

During November we were encouraging people to complete a survey about the financial impact of MND further information https://mnda-eastkent.org.uk/wordpress/?p=1898

Our year ended by funding the installation of a hoist for Martin living with MND, making a contribution to our CEO annual appeal and enjoying a wonderful Christmas Lunch at Yarrow Hotel in Broadstairs.

Apologies for any errors or omissions please contact webmaster@mnda-eastkent.org.uk

On his most recent visit he caught the beauty shown below in a lake in the Champagne Region, it is a mirror carp and weighed in at 32 pounds and took over 20 minutes to land.

For those who appreciate the finer points of fishing, it was using a 15lb mainline with 3 Tiger Nuts as bait.? The temperature was 28C, difficult conditions but Darren had a great time. 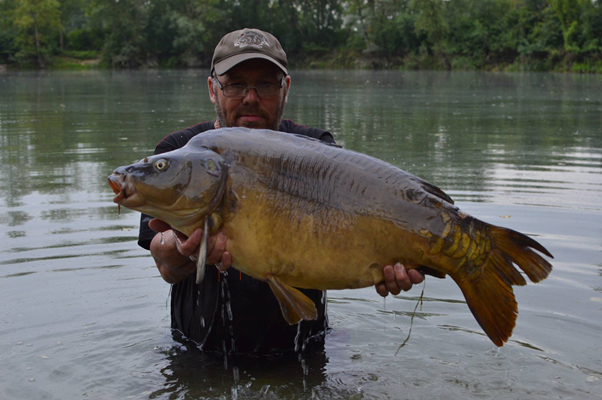 Daren would like to thank MND Association for the financial contribution towards his holiday trip.

Several staff members of The?Co-Op are running to raise funds for MND Association on 30th September.? They will be running from the Co-Op in River starting at 9.30 am, to the?Co-Op in Mill Hill, a distance of roughly 10 miles.? They are expected to arrive in Mill Hill around 11.15am.

Well wishers are welcome at either Co-Op to cheer them on. 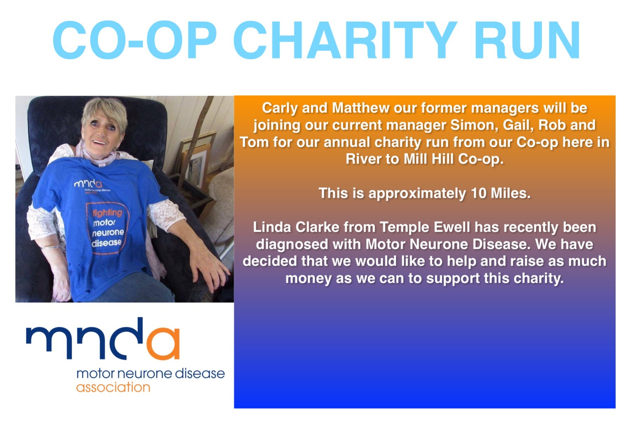 You can support this wonderful fund raising event by visiting this Just Giving Page?and making a donation.